The 1972 Rickenbacker was my first serious instrument. I bought it at 8th Street Music in Philadelphia, and played it almost exclusively up through 1976. It was in use when I was in the Eastern High School Stage (Jazz) band, and also with my early rock groups, such as Catapult, and the Corner Boys. I even used it in my early months with the big band at Glassboro State College. However I soon switched to the next bass. 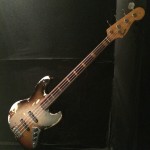 This 1966 Fender Jazz Bass became mine in 1976. Someone had already filed the top three frets off. So, rather than pulling the other frets out, I had the remaining frets also filed down to the fingerboard. Every few years I re-coat the neck with some sort of goop to protect the wood.

I played my later gigs at Glassboro with it, and when I moved to California in 1977, it became my only bass, up until the late 1990’s. I used it on countless recording sessions and dance classes. I’m pretty sure it is the only bass I recorded with for the Ugly Janitors of America LP’s. 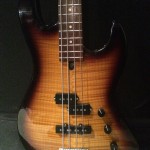 Shortly before 2000 I began to feel the urge to play a fretted bass again. This was, in part, because of the sort of material I was playing with the band, Forever Einstein. After trying out a number of different basses for the short term, fate led one very special Sadowsky bass into my eager hands. It has one of their early pre-amps, a very unique neck, and one of the most resonant bodies I’ve ever heard on an electric instrument.

It came just a tad too late for my bass solo CD, The Restaurant Behind the Pier, but can be heard on Down With Gravity, my last Forever Einstein CD, and on a number of YouTube videos. 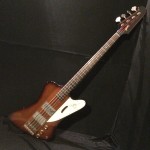 Here is a 1964 Gibson Thunderbird IV I’ve used on occasion. It has a pretty unusual sound – very clanky. Think early John Entwistle. Like its Firebird guitar relative, it was only made for two years in this form, that is, one piece neck/body down the center, and “reversed” contours.

I recorded a cover version of The Kinks’ “I’m on an Island” with James Velvet a couple of years ago. It can be heard here.

In the original version, Peter Quaife also had a very clanky bass sound, but I’m guessing it was a Rickenbacker (also a solid down the middle bass known for its clank, especially after Chris Squire got ahold of one.)