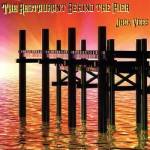 The Restaurant Behind the Pier
Label: Recommended Records
Year: 2000

Bassist comes up with a solo recording? So many musicians fear to be alone with their instrument. Jack Vees succeeds, meanwhile, to overcome these difficulties and to bring us into an emotionally rich musical sphere. Building on the tradition of jazz, which is, he said, his basis as a working musician, he has managed to develop a game of his own and offer the public his vision of music. Most parts of the album are original Jack Vees compositions; But we will listen with attention three titles that have marked the recent history of music: Manic Depression by Jimi Hendrix, I Want You (She’s So Heavy) by John Lennon and As You Said , Jack Bruce (and Pete Brown). He manages, in these three pieces, to reconstitute the magic and intensity of the music, and also to integrate a personal language to adorn what he found, and color them with the musical palette he has created. Tradition, work and transcendence in this album are in good supply.

“Only Bass Guitar” warns the subtitle.  A dazzling Manic Depression by Jimi Hendrix is the first track. Jack Vees analyzes the content and meaning as a true performer in search of perfectiontotal. In a recent interview, he stated that it was the influence of two teachers and of his careerdeveloped within different experiences. By Vinko Globokar and Louis Andriessen has learned toidentify and listen to what’s come from militancy, punk, and jazz, love for the performance violent, Bach, Beatles, Stravinsky, Varèse and Zappa. The CD also features the electric bass patterns incontemporary music, strains of conceptual research on harmonics and a version of I Want You (She’s So Heavy) by Lennon McCartney. We will hear much talk about The Restaurant Behind thePier.

Jack Vees plays solo bass. Completely alone on the CD, with some overdubs on four titles. And also on “Manic Depression” by Jimi Hendrix. The same goes for The Beatles’ “I Want You (She’s SoHeavy)” and the wonderful “As You Said” by Jack Bruce / Pete Brown (for The Cream).  Vees’ own compositions sound different, just their own. This is particularly evident in “John Henry”, a heavy metal-orgy without period or comma. Also there hammered harmonics in the title piece. At the endin “Surf Music II” he lets the true meaning of the compilation out: to experiment with the sound of the bass guitar. No mere handmade bubbles, but the true artiface of sound.

After reading an article by the tone decidedly laudatory appeared in the April issue of the American magazine Bass Player, Jack Vees had added to the list of names to keep an eye on, with the intention of listening as soon as possible “The Restaurant Behind the Pier” – whose publication, as often happens, it was not shortly after the announcement. Listening has exceeded our wildest expectations: certainly beautiful and exciting when experienced from a purely “touch” the album is a bright example of that elite class of works in which the development of musical language and technical language of the instrument are one. The disc opens with an incredibly faithful version of Hendrix Manic Depression – for bass only; almost perverse choice of the other covers: the Lennoniana I Want You (She’s So Heavy), we would say that a memory respected in the “bend” in the blues and murmurs of Moog and grow in the famous final; and As You Said Jack Bruce, a song that in the recorded version by the famous bass player had no bass! Beautiful original tracks overdubbed not including the title track, including harmonic and “percussion”, is ideally linked to certain climates Reichian, while John Henry presses on with determination and decision of the fuzz pedal and Monsieur Piñata is full of mysterious resonance. The final Surf Music II is breathtaking: 22 ‘a lot of harmonics obtained by “rubbing” bass shows a sense of composition of the first order. Contingencies of life by allowing hope to talk soon with Jack Vees.

A solo bass guitar album? (From the first “jazzman” came,) it could turn to the demonstrativeprowess or shameless plagiarism of Pastorius. Jack Vees has another pedigree: some of youprobably know him as the bassist of truculent Forever Einstein, others as composer and Bang on a Can. As if that was not enough to make him be very busy, Vees is also co-director of the Centre for the Study of Music Technology at Yale ,and published in 1981 the very first book on bass harmonics.

Harmonics, Jack Vees cultivates bold on this Restaurant Behind the Pier, his new solo album afterSurf Music Again, which appeared four years ago. Overall, it was designed on “everything you never dared to do with the bass”.  Vees operates with equal determination the area of ​​the rock andambient music through personal compositions and times enjoying astounding developments he did to the playing techniques of his instrument.

Manic Depression by Jimi Hendrix, I Want You (She’s So Heavy) Beatles and As You Said,  JackBruce are so masterfully reinvented by way of overdubbing, while the extreme distortion rages onJohn Henry and the amplification (using a piano frame!) carves a vertiginous space MonsiurePiñata. Jack Vees causes intriguing arabesques proceeding hammering the frets (the title track) oruses a glass ashtray and a mallet to extract the 4-string sound volumes unpredictable. The piece de resistance, Surf Music II rules, with its 22 minutes of disturbing and surreal intertwining of floatingharmonic lines and proves to be a more profound lesson that a lot of productions “new age” stuck in their molten sugar levitation. Letting himself be carried away by his flow, we easily forget that this piece was not designed on keyboards!

In contact with The Restaurant Behind the Pier, some will wonder if they are still listening to music, others will see the manifest for postage beyond the sound and technical boundaries they have been waiting for.  And we do not need to be a bassist to marvel. 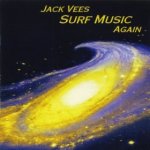 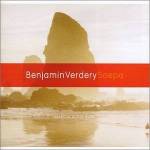 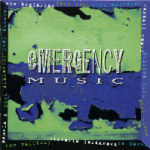